The term "shisha" used in Europe goes back to the Persian word shishe , which means "glass". The Turkish word sise means "bottle", in certain Arabic dialects specifically refer to the bowl of shisha or the entire hookah.

Another common term that refers to the water pipe is " Nargile ". This is derived from the Persian word nargile . Nargile means "coconut" and describes one of the materials that made up the original Indian hookah.

Derived from this term is also the Sanskrit word (English language) narikela , as well as argila and nargila in certain Syriac and Hebrew dialects.

Other terms used are goza (Sudanese for "nut"), which is mainly used for smaller shishas, as well as the word hookah used in the UK and US for the hookah is needed.

Origin and development of shishas

The water pipe and the tobacco we know today have not been invented overnight. The shisha has been around for a long period of about five hundred years Smoker developed with a fruity aroma and light smoke that is so popular today.

The shisha originates originally from the north of India , more precisely from the regions of Rajasthan and Gujarat, which are close to the Pakistani border. As the Persian name nargile implies , the hookah was originally made partly from coconuts.

Through Persia, the hookah came to Arabia, the Ottoman Empire (today's Turkey) and North Africa, especially Tunisia and Egypt, between the 16th and 17th centuries.

In Turkey, the hookah smoking was introduced in 1603 by Sultan Ahmed I, who was known for his enjoyable lifestyle. 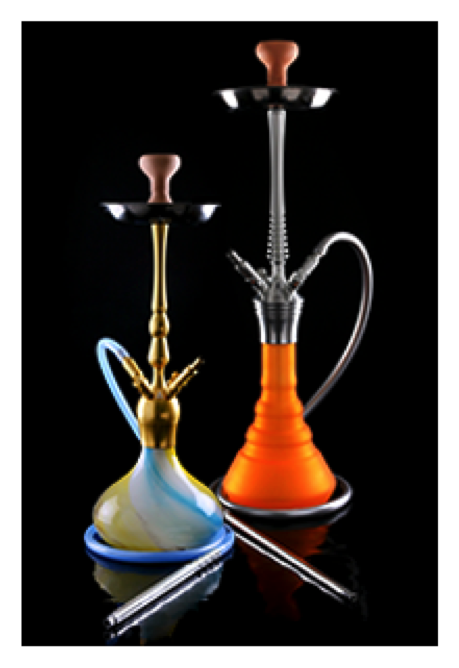 In the meantime, some of his successors have repeatedly banned smoking since it was considered vicious at times. Thus under Murad IV. Several people a day because of Tobacco smoking executed.

Nevertheless, over the years the water pipe has developed into a cultural asset in the Arab countries. It stands for a balanced way of life, for hospitality and Sociability.

Often celebrated in coffeehouses, shisha smoking was often a social event that brought family and friends together. To make these events even more special were added Sweets and pastries are served, as well as tea and coffee drunk.

In these smoke ceremonies certain rules were observed. For example, the coal was not allowed to be lit with a candle and its own shisha placed no higher than the others.

Failure to comply with these rules could quickly lead to social exclusion. The hookah itself was a precious family piece , which has been inherited from generation to generation.

Construction of the shisha

At that time, the construction of the hookah, as we know it today, developed with a metal smoke column, a bowl of glass and a hose made of leather . The functioning of the hookah, however, was always the same.

Development of shisha from the 20th century

After the heyday of the hookah, however, it went from the beginning of the 20th century more and more out of fashion. While she previously stood for sociability and friendship, she was now as a smoking device old people frowned on , similar to the classic tobacco pipe today in our society, or dusted as a decorative piece or souvenir from the last Turkey holiday on the cabinet, as they are partly still doing today.

In the last ten years, however, the water pipe has experienced a resurrection. It has been rediscovered by the younger generation of Arab society and is Become a lifestyle object .

Shisha smoking is often considered modern and stylish, even the original value of relaxing together, today with the word "chilling" out, shisha has regained.

In large cities like Dubai and Istanbul, hundreds of Shisha Cafés have opened in the last few years, where especially young people and young adults meet in the evenings. From the nightlife of these cities they are almost indispensable

This is often perceived as negative by the older generation, because the modern hookah bars displace some of the traditional coffee houses , in which even today the smoked classic Tömbeki.

Shisha trend in Europe and USA

Meanwhile, the trend has also prevailed in Europe and the US. Many teenagers smoke shisha occasionally or regularly. In the years 2005 and 2006 it has a real shisha hype given, but slowly disappears again. One explanation for the fact that the shisha is so successfull here is that the shisha is a contrast to the ever-accelerating everyday life. Smoking shisha means rest, relaxation and having time , a feeling that the quick cigarette can not deliver.

The text is a translation of an excerpt from the book "The Waterpipe - Tradition and Youth Culture" by Felix B.